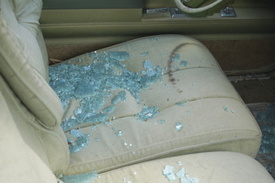 Legal news for New York automobile accident attorneys – A two-year-old boy was hospitalized after the car he was riding in was hit twice on Route 5 in New Hartford New York.

A three-car accident in New Hartford resulted in a mother and son being treated for injuries.

New Hartford, NY (www.NewYorkInjuryNews.com) – An early morning crash Monday, April 12, 2010, resulted in two people being hospitalized and part of Route 5 being shut down, as reported by NBC-WKTV.

New Hartford Police told reporters that Zamantha Dennis, 20, of Utica attempted to drive her 1997 Audi from a McDonald’s parking lot onto State Route 5. Apparently, Dennis began to cross the eastbound lanes of traffic in order to make a left onto the westbound lanes. Upon entering the road, her car was struck in the rear driver side portion by a 2000 Jeep Cherokee that was traveling eastbound.

The Jeep was driven by Vincent Halsey, 19, of Oneida.

After Dennis’ Audi was struck by the Cherokee, it spun 180 degrees into the westbound lane of travel where it was struck again in the rear driver-side section by an international flatbed truck.

The truck was driven by Theodore Siedsma, 60, of Franklin Springs.

Police reported Dennis suffered lacerations to her left arm. Her two-year-old son was a passenger in the car at the time and was seated in the rear driver side seat. He suffered a laceration to the head and a fractured orbital bone on the left side of his face.

The boy was sent by ambulance to SUNY Upstate Medical Center in Syracuse to remain under observation.

The boy’s child safety seat was properly secured, which police say prevented him from sustaining any further injuries.

The driver of the Jeep sustained minor injuries to both knees and refused medical service.

Dennis received a traffic summons for failing to yield the right of way.

The Town of New Hartford Police Department said the city’s Child Passenger Safety Unit recommends placing a child in a safety seat in the center-most portion of the seat so that it is the furthest away from a side collision.