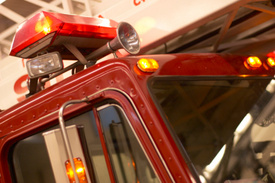 Legal news for Massachusetts firefighter attorneys – A fire truck rolled over and crashed into a light pole, sending 4 fire fighters to the hospital for non-major injuries.

Boston, MA (www.NewYorkInjuryNews.com) – A fire truck roll over in Framingham sent four fire fighters to the hospital for treatment of non-major injuries, as reported by the MetroWest Daily News.

On Saturday, April 11 2010, four Framingham firemen were heading north on Edgell Road after responding to a call on Vernon Street. At approximately 7:30 a.m., the truck skidded, rolled over, hit a utility pole, spun and eventually stopped approximately 40 feet from a family’s home. The crash smashed the fire engine’s windshield, crushed the passenger cab, splintered the utility pole in front of the home and squashed hedges.

Those injured were Capt. Bill Norton and firefighters Dave Carol, Bill Clover and Bob Delaney. Carol had been driving. None suffered serious injuries, as reported by Duputy Chief Thomas Barbieri.

The crash, which took hours to clear, is under investigation. Officials from the state police reconstruction team and engineers from the nine-year-old truck’s manufacturer, Pierce Fire Apparatus, were scheduled to examine the engine Monday, April 12, 2010.

While Fire Chief Daughtery told reporters, “We have no idea what caused this crash,” the family residing in the home where the accident occurred said there have been multiple accidents at the site. A woman living at the home explained, “There have been numerous accidents. It’s a straightaway, so I’m not sure why. But this is the second or third time they’re going to have to replace that pole.”