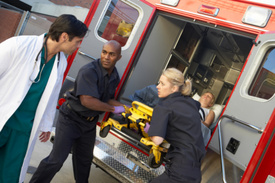 A dump truck collided with a Toyota on Route 304, causing blocked lanes for over 6 hours.

New City, NY (www.NewYorkInjuryNews) – A crash between a dump truck and four-door Toyota on Thursday, April 8, 2010, resulted three injuries, two of which were reportedly serious, as reported by the Journal News. Three members of a Spring Valley were hospitalized.

The two-vehicle accident happened at approximately 3 p.m. on Route 304, at the corner of Johnsons Lane. Both lanes were closed until approximately 9:30 p.m., which police investigated the crash.

First Assistant Chief of the New City Fire Department, Ken Flynn, said that the crash occurred when a dump truck collided with the Toyota.

The 45-year-old female driver of the car was seriously injured, and her 44-year old husband were transported to Nyack Hospital. The woman was reportedly in critical condition while her husband was in serious but stable condition, as reported by Rockland Paramedic Services’ Ray Florida.

The seven-year-old girl in the back seat of the Toyota sustained less serious injuries. She was transported to Westchester Medical Center for leg injuries.

The family reportedly had to be extricated from the vehicle by the fire department.

As of Friday morning , April 9, 2010, there had been no change in the crash victims’ conditions, according to Clarkstown police.