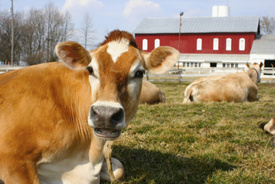 Pasture Maid Creamery, owned and operated by Adam Dean, sells raw milk directly to consumers. All consumers who purchased raw milk from the dairy from mid-March through the present are advised to immediately discard it. Even if frozen, Campylobacter may still contaminate the milk.

Human ingestion of Campylobacter bacteria causes diarrhea, nausea, vomiting, abdominal pain, headache and muscle pain. Symptoms will typically appear two to five days after exposure. Most cases of the infection are mild, but Campylobacter jejunti infection, or campylobacteriosis, can be severe and life-threatening. It can cause appendicitis, infect other organs or even enter the blood stream. An estimated one in 1,000 cases of Campylobacter infection results in death.

Additional information can be supplied through contacting the Pennsylvania Department of Health at (877) PA-HEALTH, or by visiting the organization’s website at wwww.health.state.pa.us.