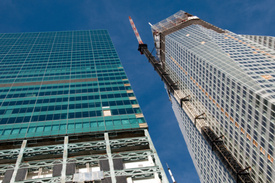 New York City, NY (www.NewYorkInjuryNews.com) – The NYC mayoral administration was fined $5,000 on Tuesday, April 6, 2010 for repeatedly ignoring court orders to provide information from a 2008 crane collapse that killed two men, according to The New York Times.

The judge penalized the city for not providing the families of the deceased men with documents, e-mail messages and other information concerning equipment supposedly inspected by the city.

The families of Donald C. Leo and Ramadan Krutaj filed lawsuits against New York City’s Buildings Department, the crane company, the company’s owner and others, which alleged that negligence and corruption in connection with the collapse of the machine and resultant death of the two men. The collapse occurred on East 91st Street, in May 2008.

The families’ attorneys were attempting to acquire copies of communications concerning the crane from the Buildings Department, and prevent the city from testing the crane without the families present.

State Supreme Court judge, Paul G. Feinman, ruled the city had failed to comply with court orders to provide the documents on numerous occasions. He cited the city for its “flagrant disregard” of a court order and demanded it compensate the families $2,500 each for legal fees.

The city apparently disagrees with the ruling. A spokeswoman stated, “we did not violate any court orders and are considering our legal options.”

In March 2010, the owner of the crane company was indicted on manslaughter charges for the accident. He was accused of not properly repairing the crane’s broken turntable and hiring a company that was not qualified to repair it in order to save money.

The city inspector who approved the crane for use resigned from his position after being accused of neglect of duty.