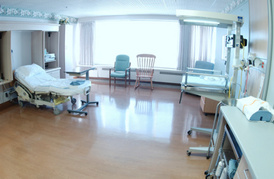 Albany, NY (www.NewYorkInjuryNews.com) – A NY Supreme Court judge has ordered a $5.2 million settlement for malpractice and ordered procedure changes at Albany Medical Center Hospital as a result of the September 2007 death of a Cesarean section patient who bled to death , as reported by the Times Union.

The Albany Medical Center Hospital and two physicians, Dr. Sean Lee and Dr. Cheryl Burrack, were found responsible for the death of Diane Rizk McCabe, of Rotterdam, who suffered internal injuries after the Cesarean section birth of her second child.

The judge sentenced that the hospital pay $1 million, Dr. Sean Lee to pay $2.3 million and Dr. Cheryl Burrack to pay $1.9 million. The hospital is also required to pay for the “Diane McCabe Memorial Quality Lecture,” which will focus on topics related to enhancing patient safety. The lecture is mandated to continue for 20 consecutive years. Furthermore, the hospital must purchase a Noelle Maternal and Neonatal Simulator within 60 days of the sentence and change the default settings of its OBIX Perinatal Data System machines.

McCabe’s husband, Joseph McCabe, a Schenectady police officer who did not return to work for over a year following his wife’s death, said in a statement, “The settlement provides non-monetary benefits which will serve as a living memorial of Diane for our children and family. We hope that it will improve the quality of medical care in this area and reduce the likelihood that another family will have to endure the suffering and loss that our family has undergone.”

The lawsuit claimed that Dr. Lee and his assisting resident either cut or tore McCabe’s uterine arteries during the Caesarean section delivery of the couple’s second child. As a result, she hemorrhaged while in the operating room, losing approximately 60 percent of her blood volume.

Dr. Lee refused to heed calls from the attending physician on duty that McCabe was bleeding internally. Colleagues of Dr. Lee testified they told him she was bleeding and needed to undergo an operation to fix the problem. Lee demanded they wait six hours.