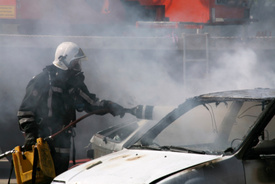 Legal news for New Jersey automobile accident attorneys – 2 NJ men were involved in a drunk-driving police chase and crash in Beachwood, 1 was killed.

A Barnegat man was killed after his  friend crashed into two trees and a fence.

Beachwood, NJ (www.NewYorkInjuryNews.com) – An early morning police chase and subsequent crash resulted in the death of a Barnegat man riding as a passenger, as reported by the Asbury Park Press.

Joseph Lazarus 26, was pronounced dead at the scene of a crash after the driver, Joseph Hamilton, 32, of Beachwood, sped away from an officer attempting to pull him over and consequently smashed into two trees at approximately 2:50 a.m.

According to reports, Pine Beach Officer Dennis Allen was conducting radar readings in the area of Route 9 and Mizzen Avenue when he clocked the 1988 Ford Mustang convertible traveling at 88 mph. When Officer Allen tried to pull the driver over, the driver headed west on Mizzen Avenue into Beachwood and sped away.

The car hit a tree on Mizzen Avenue, and then smashed into another, landing in a fence that separated two yards. The Mustang then caught fire. The driver was ejected. Lazarus was wearing a seatbelt and thus partially ejected, according to police.

Hamilton suffered minor cuts and was taken to the Ocean County jail, Toms River. His bail was set at $100,000. Police charged Hamilton with driving while intoxicated, vehicular homicide and a myriad of other motor vehicle summonses.

A preliminary investigation indicated the two men may have been recent acquaintances, having met while dirt bike riding, and decided to go to a party together.

An investigation into the crash was on-going as of April6, 2010.