Over 2000 NYC subway cameras do not work: Security concerns rising 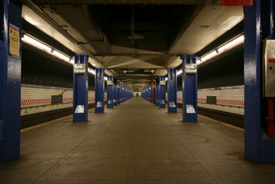 New York, NY (www.NewYorkInjuryNews.com) – About half of the cameras along NYC’s subways are out of commission and police patrols have been cut from the areas due to budgeting issues, as reported by amNewYork. Over the last 10 years, the MTA has installed hundreds of cameras throughout the subway turnstiles, platforms and tunnels, but now over half of them are not recording.

The fatal stabbing of two men on Sunday, March 28, 2010, brought to light security concerns due to the lack of cameras operating within the subways, prompting Mayor Michael Bloomberg to comment, “maybe someday we’re going to get very badly hurt.”

The two victims of Sunday’s event, Darnell Morel and Ricardo Williams, were 24 years old. There was no camera in the station where the stabbing happened and the suspects remain at large.

While some of the 2,043 inoperable cameras do not work because of heat, water or electrical damages, the others are incapacitated because of litigation. Lockheed Martin was hired by the Metropolitan Transportation Authority (MTA) in 2009 to install cameras but the two firms have been locked in court battles over deadlines and faulty products.

Lockheed Martin blames the MTA for delays that prevented construction deadlines from being met. The MTA has stated that Lockheed Martin provided faulty products. The two have sued and countersued each other, further delaying progress.

While these suits and countersuits continue, approximately 600 subway agents have been laid off due to budget cuts.

MSNBC reported that a spokesman for the MTA stated, “The safety and security of our customers is the MTA’s top priority,” and that the agency will soon grant a contract to get approximately 900 turnstile cameras up and running.

Meanwhile two violent crimes have occurred in the last four months in dead zones, which include 23 key stations.

According reports from MSNBC, there were approximately 50 crimes a day reported within the subway in the 1990s. Compared to the approximate five reports a day now, with about a million less people, the crime rate is lower than it was in the 90s, but still provides ample fuel for passenger safety concerns.