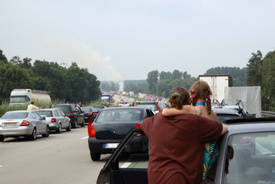 Montebello, NY (www.NewYorkInjuryNews.com) – Police and emergency vehicles responded to a collision between a Ford Focus and a dump truck Tuesday, March 30, 2010, where two high school students were pronounced dead at the scene, as reported by LoHud.com.

The accident happened at approximately 11 a.m. along Route 202 near Lake Road.

Vincent Crotty and Christopher Konkowski  were on their way to baseball practice for their final season at Suffern High School when the Crotty’s Ford Focus crossed the double yellow line and was hit by a dump truck. The driver of the approximately 12-ton truck, Francisco Abarca, 57, of Succasunna, N.J., was uninjured.

Authorities are investigating the crash. For reasons so far unknown to police, the Focus was sideways across the road when it was hit by the truck.

According to Ramapo Detective Lt. Brad Weidel, “The car was not exactly perpendicular to the road, but for some reason the vehicle became sideways on Route 202.”

The two-lane highway was closed for over four hours as police, emergency personnel and investigators reconstructing the accident worked the scene.

The boys were best friends, according to family members and planning to attend Utica college in upstate New York.