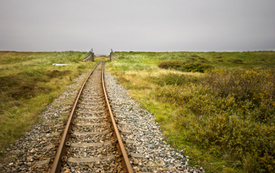 Legal news for Pennsylvania train accident attorneys – A Pittsburgh man was found conscious but in shock with major injuries after being struck by a train.

Pittsburgh, PA (www.NewYorkInjuryNews.com) – Pittsburgh man, John E. Kidney, 48, was hit by an eastbound CSX freight train on March 24, 2010, resulting in the loss of his legs, as reported by the Tribune Review.

The incident happened at approximately 3:30 a.m., according to state police at Greensburg, along the Sutersville-West Newton Road. This is the latest in several accidents, including two fatalities since 2007, in the Sewickley Township community. Emergency personnel arrived on the scene shortly after 4:30 a.m., about an hour after the initial hit. Kidney was found conscious but in a state of shock. According to Sutersville fire Chief Mark Ghiron, both the victim’s legs were off.

Police report the “victim was on foot on or near the tracks” when he was struck. While the nearest vehicle crossing is Brewery Crossing in Suttersville, there is no indication that any automobile was involved.

In May 2009, 18-year-old Dustin Chenault was killed by a train in the same vicinity of this accident. In March 2008, 24-year-old Joseph Hermann was struck and killed in front of his home in Sutersville. Several nonfatal accidents from 2007 and 2008 have also been reported. It was reported that as many as 35 trains run through Sutersville a day.