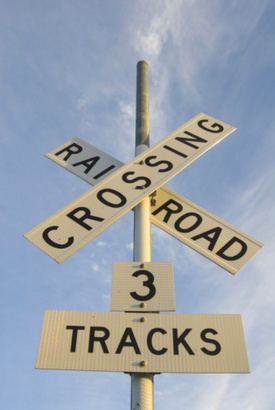 Legal news for Maryland train and automobile accident attorneys – An MD Man who failed to heed warning signals collided with a tractor trailer and a third vehicle, train driver injured.

Cockeysville, MD (www.NewYorkInjuryNews.com) – An investigation into a crash between a light rail train, a tractor-trailer and another vehicle on March 23, 2010 has lead to possible charges for the truck driver involved, as reported by The Baltimore Sun.

On Tuesday morning, March 23, 2010, a 2007 Volvo cab pulling a Wabash trainer filled with plastic bottles pulled onto the tracks in front of an oncoming light rail train. The signals to deter entry onto the tracks were active, as reported by Baltimore County Police spokesman, Corporal Mike Hill. In addition, Hill reported the stop and no-turn signals were visible and could be seen flashing. As the train hit the truck, the trailer collided with a 2009 Honda Civic that was behind the trailer.

The light rail driver, Deborah Morton, 51, was pried from the wreckage and taken to Maryland Shock Trauma Center where she remained in serious but stable condition. Both truck driver and the driver of the Honda, John Schoen, refused medical treatment at the scene.

The driver of the truck, Mark Szurek 53, is facing charges. The investigation has also brought to light the fact that warning bells and guard gates are not stationed at the street intersections.