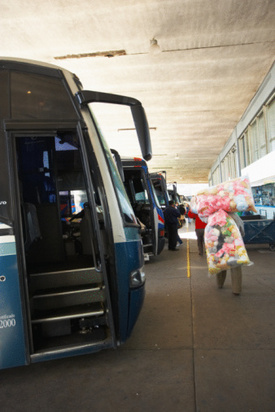 Newark, NJ (NewYorkInjuryNews.com) – A pedestrian was reportedly struck and seriously injured by a New Jersey Transit bus at an intersection in Newark Monday evening, March 1, 2010, according to the Star-Ledger.

Police and city detectives reported to the scene of the serious pedestrian accident, which occurred at the intersection of Irvine Turner Boulevard and 18th Avenue around 5:30 p.m.

The pedestrian was found pinned beneath the mass transportation vehicle by responding officials. After rescue crews freed the trapped victim, emergency medical services (EMS) arrived in an ambulance to transport the injured pedestrian for medical treatment. The injured person was taken to be treated at University Hospital, where doctors tended to his severe injuries. Medical professionals stated that the person was listed in critical condition.

The pedestrian’s identity was not disclosed. It was reported that authorities from the local police departments homicide unit and the Essex County Prosecutor’s Office continue to investigate the serious and tragic collision. It had not been deemed an accident or a deliberate act of violence. It was not reported if anyone was on the New Jersey Transit bus at the time of the incident. The investigation continues.