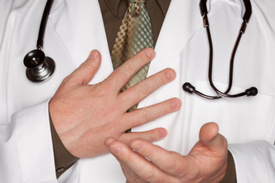 Legal news for Pennsylvania medical malpractice attorneys –A man died from cardiac arrest after being denied urgent medical care for lacking medical insurance at the Hospital of the University of Pennsylvania.

Philadelphia, PA (NewYorkInjuryNews.com) — A man needing urgent medical care was misdiagnosed by a doctor and denied treatment due to lack of health insurance, which led to his tragic and avoidable death. The lawsuit filed on behalf of 56-year-old Marcus Murray and his wife, versus the Hospital of the University of Pennsylvania, went to federal court March 2, 2010, according to the Philadelphia Inquirer.

Murray was refused medical treatment at the Pennsylvania hospital when he needed immediate surgery to treat an “aortic dissection”, a tear in a major artery, which led to his death. The Hospital of the University of Pennsylvania (Penn) would not admit Murray after they learned that he lacked insurance, according to the Murray’s lawyer.

Cardiothoracic surgeon, Y. Joseph Woo at Underwood Hospital, and the Penn emergency-room doctor on the case, Robert M. Sidwa, were also named in the lawsuit. Underwood allegedly failed to diagnose Murray properly and did not send him to a hospital that had the capacity to handle his serious condition.

A nurse made a note in Murray’s medical records stating that Penn “refused to accept patient due to no medical insurance.” Murray waited for hours for necessary medical care while doctors and medical professional tried to make arrangements for him to go to another hospital for the surgery. When they finally got him on the operating table, he tragically passed away from cardiac arrest.

Records showed that it had been nearly eight hours since the emergency medical services (EMS) had taken him in. The Murray’s attorney stated that it was clear in medical records that Penn “accepted and then refused the patient and refused on a very specific basis.”