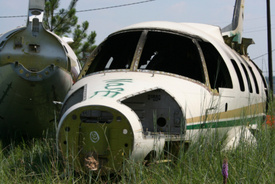 Edgewater, MD (NewYorkInjuryNews.com) – The Federal Aviation Administration (FAA) www.faa.gov and the National Transportation Safety Board (NTSB) www.ntsb.gov investigate a single-engine plane crash , which occurred in the town of Edgewater Saturday, February 27, 2010, as reported by WBALTV.

Maryland State police and emergency medical services (EMS) arrived at the scene of the aviation accident a quarter of a mile away from Lee Airport. The plane, identified as a Beechcraft Bonanza P35, had reportedly swooped to the right then flew through some trees and ultimately ended up in a nearby resident’s backyard in a fiery wreck on Warehouse Creek Lane. It was reported that the pilot was killed in the crash.

When Anne Arundel County fire officials arrived at the scene, the damaged aircraft was on fire with billowing smoke rising above it. Luckily, the flames stayed contained to the destroyed aircraft and did not spread to the resident’s house on the property. The pilot was identified as 53-year-old Joseph Luther Kelly III tragically suffered fatal injuries.

Officials reported that there were no passengers onboard the downed aircraft at the time. It appeared the plane was attempting to land at Lee Airport before it plummeted to the ground. Weather conditions were clear that Saturday afternoon. It was not reported if the pilot was declared dead at the scene or at an area hospital. Authorities are still unclear as to why the small plane crashed. The investigation continues.