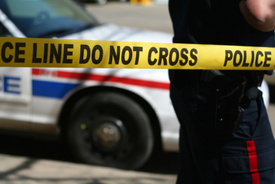 Wheatfield, NY (NewYorkInjuryNews.com) – A female Niagara County Sheriff deputy had to be hospitalized after a motor vehicle slammed into her police cruiser Wednesday evening, February 24, 2010, as reported by The Union-Sun and Journal. Police responded to the scene of the motor vehicle collision (MVC) at Lockport Road near Walmore Road in the town of Wheatfield.

Officials reported that the sheriff was on-duty, sitting in her police cruiser Wednesday evening writing out a summons, when she was suddenly struck from behind by another vehicle. The 2004 Dodge Neon slammed into the patrol car launching it into the westbound lanes of traffic. The accident occurred at 6:30 p.m. and blocked traffic in the westbound lanes for more than an hour.

The driver of the Dodge, was identified as 77-year-old Glenn Tilyou, remained unharmed in the motor vehicle accident. Emergency medical services (EMS) arrived at the scene of the crash to transport the officer to Mount St. Mary’s Hospital. She was evaluated and then released by medical professionals. Police issued Tilyou a ticket for an unsafe lane change and failure to stay in the right hand lane.