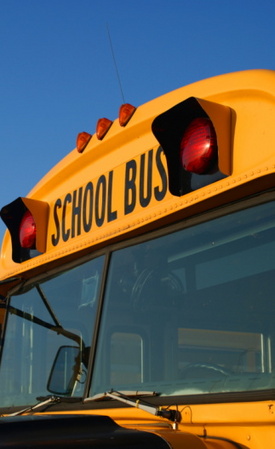 Hartford, CT (NewYorkInjuryNews.com) – Nine children were injured when a school bus driver crashed into an SUV at an intersection at Hartford around 6 p.m. Wednesday, February 24, 2010, according to the Hartford Courant.

Police and emergency medical services (EMS) responded to the scene of the accident at Weston and Jennings Road, where the school bus sat with 21 students onboard. Nine of the students complained of experiencing pain after the accident. Police reported that the school bus driver, identified as Linda Torres, was tailgating the SUV in front of her, while she was taking children home from the after-school program. The school bus rear-ended the SUV at the intersection around 6 p.m.

The school bus was transporting students between the ages of 6 and 14, at the time of the incident. Nine of them were transported via ambulance to be treated and examined by doctors at the Connecticut Children’s Medical Center. The children were released to their parents the same day. Torres remained unharmed in the motor vehicle accident. Police issued Linda Torres a ticket for tailgating. There were several worried parents and the student’s principle, of Global Communications Academy, went to the scene of the accident.