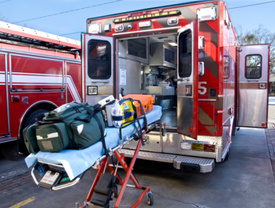 Davenport, NY (NewYorkInjuryNews.com) – New York State police reported to the scene of a truck accident where a flatbed tractor-trailer transporting concrete crashed into a house killing one and injuring four other people, Friday morning, February, 19, 2010, as reported by WCAX.

The fatal truck accident occurred in upstate New York in the town of Davenport. State police reported to the scene where the tractor-trailer had ended up in the one-story home located in Delaware County. Investigators reported that the truck reportedly swerved off the road when the driver failed to negotiate a curve, and the semi slammed into a resident’s home around 5 a.m. Friday morning.

The impact of the collision sent the concrete materials that that the truck was carrying flying into the house, killing one resident while she was fast asleep and injuring four others. Another woman in the house and a 5-year-old child were also injured by the concrete projectiles, and were taken to area hospitals to be treated for non-life threatening injuries. Their identities were not disclosed.

State police identified the victim who was killed as a result of the truck crash as 46-year-old Rhonda Hitchcock. Police stated that the 61-year-old driver of the tractor-trailer, identified as Charles Harford, resident of Binghamton was traveling with an unidentified passenger at the time of the fatal wreck. Both the driver and the passengers sustained injuries of cuts and bruises. The investigation continues to determine all the factors involved in the fatal truck accident.