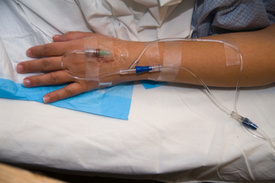 Brooklyn, NY (NewYorkInjuryNews.com) – A woman was on life support Monday, February 22, 2010, after being struck by a motor vehicle 4:30 a.m. Sunday morning, February 21, 2010 in Brooklyn, reported the New York Times. Police reported to the scene in the Flatbush section of Brooklyn where they found the two injured females and the vehicle that struck them down the road unoccupied by the driver, who reportedly fled the scene. Police reported that the two females had been walking down that Flatbush Avenue when an Acura Legend struck them, and the woman driving it had escaped into the subway.

Police identified one of the females injured in the crash as 22-year-old Erinn Plelan, who was employed by Mayor Bloomberg, after she graduated from Brown University. She and her college roommate, Alma Guerrero, were transported to Kings County Hospital where Erinn was placed in critical condition. Erinn was pronounced brain dead Sunday night. Alma was expected to recover from her injuries. Police reported that Erinn had pushed her friend out of the path of the car, and she sustained the main impact of the vehicle.

New York City Mayor Michael Bloomberg visited Erinn in the hospital and then released a statement regarding the tragic incident: “When I spoke to Erinn’s parents … I told them that, as a father, I can’t begin to imagine what they are going through, but all of our prayers are with their dedicated and idealistic young daughter who’s helping New York City answer President Obama’s historic call to service.”