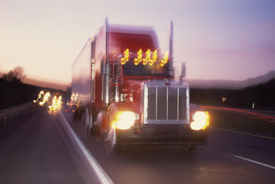 Pennsylvania state police reported to the scene on Interstate 80 where the man was struck and fatally injured in the eastbound lanes of traffic. Officials believed that 65-year-old Billy Ray Williams, was attempting to cross the road, walking in front of his vehicle near the Grove City and Sandy lake Exit when a semi truck struck him and kept going. The semi truck fled the scene of the accident, leaving the retired state trooped severely injured on the highway.

Emergency medical services (EMS) rushed to the scene to transport the injured man for treatment. Upon arrival at Grove City Medical Center, Williams injuries proved fatal, and he was declared dead by medical officials. Responding State police said that the one lane was closed for 5 hours after the fatal incident. Police investigators are still trying to determine if the trucker realized that he had hit someone or not. Williams was a retired police officer of the Mercer State police barracks.

Police encourage anyone with information regarding this tragic incident to contact Pennsylvania State Police at 1-724-662-6162. The investigation continues.