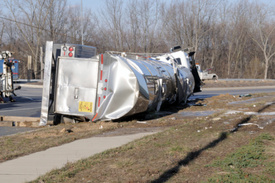 Philadelphia, PA (NewYorkInjuryNews.com) – A semi truck transporting eggs flipped over and burst into flames on the Ben Franklin Bridge injuring the driver at 11 a.m. on Wednesday, February 17, 2010, as reported by CBS3.

Police reported to the scene where the tractor-trailer had overturned and caught fire trapping the driver inside the cab. Rescue officials arrived at the scene at the bottom of the Ben Franklin Bridge near 6th and Arch Streets and extricated the injured truck driver from the damaged vehicle. The driver complained of neck and back pain. Emergency medical services (EMS) responded to the truck accident and an ambulance transported the injured man to be treated at Jefferson University Hospital. Doctors and nurses treated him for his injuries and he was reported to be in stable condition.

Cleanup crews turned the damaged tractor-trailer upright and the roadway was reopened before the evening. It was not reported if any of the trucks cargo was still salvageable and could be loaded onto another truck. Police continue to investigate the crash to determine how the truck accident occurred.