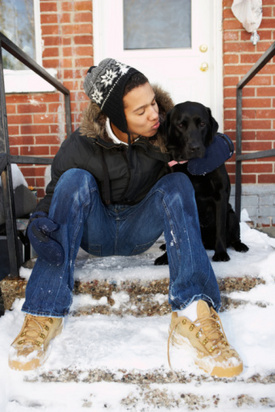 Far Rockaway, NY (NewYorkInjuryNews.com) – A man from Queens was leisurely walking his pet dog when he was suddenly electrocuted on the sidewalk around 2 p.m. Wednesday, February 17, 2010, according to WPIX.

The 52-year-old man was walking his pit bull on the sidewalk along Cornaga Avenue when he suddenly felt a jolt and could not move. James Evan’s dog, Max, then began to yelp from the shock. Max managed to brake free of the electrical currents pull, and dragged his injured owner away from the scene to safety.

James Evans later told news sources that he felt that if his dog had not pulled him away, that he would have ended up lying on the ground dead. Emergency medical services (EMS) arrived at the scene to transport Evans to the Peninsula Hospital Center for treatment; however, he refused because medics would not allow his injured animal to ride with him in the ambulance. Max suffered burns to his paws, and the electrical shock apparently changed the color of his fur from black to brown. The dog was still shaking an hour after the incident, claimed Evans.

James Evans admitted himself into the hospital later after the incident so that he would not have to abandon his friend who saved his life. The extent of his injuries was not known. After the serious incident, the Long Island Power Authority turned off the power at a church building along the street where Evans had been electrocuted. Officials believed that Evans was electrocuted due to defective wiring in the building, which was transmitted through the metal doors that sent a high voltage current streaming to the sidewalk. The investigation continues.