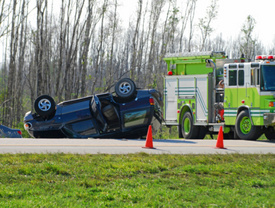 Legal news for New Jersey personal injury attorneys –Fire rescue reported to the scene where a Ford Explorer crashed into a pedestrian in Bayonne, NJ.

Bayonne. NJ (NewYorkInjuryNews.com) – Police reported to the scene of a fatal and tragic accident where one female jogger was struck and killed by an SUV in the town of Bayonne at an intersection, Thursday morning, February 18, 2010, according to the Jersey Journal.

Police and Bayonne fire rescue officials reported to the scene at the intersection of 33rd Avenue and Avenue A shortly after 5 a.m. Bayonne fire officials stated that a Ford Explorer struck a woman who was walking or jogging, then continued on and crashed into a Toyota Yaris and a Honda Civic that were parked at the time, and finally flipped over.

Authorities reported that the pedestrian woman struck was fatally injured. Officials pronounced her dead at the scene. Emergency medical services reported that the woman suffered severe upper body trauma. Her identity was not released probably pending notification of family. Police asked the driver of the Ford Explorer got out of the wrecked vehicle and answered some questions regarding the fatal accident. The driver remained unharmed. MYFOXNY.com reportedly stated that the SUV had apparently lost control when it past a Daily News delivery truck before the accident occurred.