Police, firefighter and employee treated at hospital after PA blaze 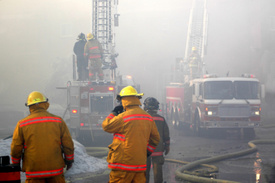 Canton, PA (NewYorkInjuryNews.com) – Canton Fire Department and police to the rushed to the scene after receiving the 911 call around 12:15 p.m. about an apartment fire, which prompted the evacuation of the entire building Tuesday, February 16, 2010, according to The Daily Review. Upon arrival, fire officials shut down Main Street where McCallum Manor where the flames and smoke billowed from the building.

Firefighters rescued one resident taken to the Troy Community Hospital then flown to Lehigh Valley Hospital Burn Center for life-threatening injuries after he was found in his apartment. It was reported that most of the 50 residents were over 60-years-old and were evacuated safely.

A firefighter, police officer and one of the employees of the apartment were taken to Troy Community Hospital to be treated for excessive smoke inhalation. Both the firefighter and the police officer were treated and released, while the condition of the employee was not known. The residents were allowed back into their apartments at 3:30 p.m. Firefighters reported that the building sustained major smoke, heat and water damage on the first and second floor.

The fire departments that assisted at the scene were the Canton, Troy, and Franklin Township fire companies along with emergency medical services group, Western Alliance Emergency Services Inc. The building is owned by the Bradford-Tioga Housing Authority. Fire officials continue to investigate how the fire started.