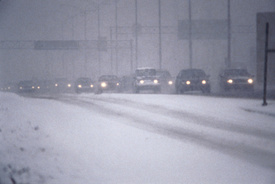 Clearfield County, PA (NewYorkInjuryNews.com) – A 50-vehicle pileup on Pennsylvania’s Interstate 80 in a wintry and deadly white-out of snow claimed the life of one man and injured 20 more at 9:30 a.m. Wednesday morning, February 10, 2010, according to WPXI.

Pennsylvania State police officials and many ambulances had rushed to the aid of the dozens of victims involved in the lengthy motor vehicle collision. Fire rescue also responded to the massive crash to assist. It was reported that there were thirty tractor-trailers, and twenty other motor vehicles involved in the pileup,which closed part of the Interstate between the Penfield and Clearfield.
EMS attended to the 20 people injured in the crash. Many were taken to area hospitals to be treated by doctors and nurses. It was not reported if any of the injured faced life threatening injuries.

There was one reported fatality in the pileup. Steven Samuelson, resident of Orangeville, Illinois, sustained injuries that proved fatal at the scene. He was declared dead by officials. Clean up crews worked for hours so that the roadway could reopen for normal traffic flow hours later. It was not reported if anyone was cited in the crash or if it was deemed weather-related. The investigation continues.