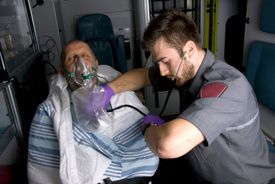 Legal news for Massachusetts personal injury attorneys – A male pedestrian was crossing the street when he was struck by a tow truck.

Worcester, MA (NewYorkInjuryNews.com) – Police reported to the scene where a pedestrian was struck and injured when he was hit by a tow truck in Worcester Thursday morning, February 11, 2010 according to WCVB-TV.

Police and emergency medical services (EMS) arrived at the scene of the accident at the intersection of Park Avenue and Institution Road close to Worcester Polytechnic Institute’s campus. The incident occurred around 11 a.m. where witnesses said that the man had attempted to cross the road when the tow truck had a green light and struck him.

Responding officials identified the driver of Pat’s Towing truck as a 25-year-old. It was not reported how fast he was going when he struck the 24-year-old pedestrian. The truck had been traveling down Institute Road heading toward Park Avenue when the crash occurred.

EMS took the injured pedestrian to be treated at UMass Memorial Medical Center for a potential traumatic brain injury (TBI). He was conscious when medical personnel found him at the scene.

Police did not announce if charges were going to be filed. The investigation continues.