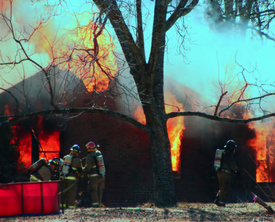 Wittman, MD (NewYorkInjuryNews.com) – Responding local firefighter departments responded to a call about a house blaze at 1:16 p.m. Monday afternoon, February 8, 2010, according to WBOC.

The Maryland State Fire Marshal’s officer reported that the fire began at the residence of a single-story home at 8600 block of Sewell Point Road located in the town of Wittman. It was reported that the inferno required 27 firefighters to bring the blaze under control in under a half an hour.

Officials at the scene reported that one of the firefighters sustained burn injuries while combating the flames. It was not reported if the St. Michael’s firefighter was taken to a hospital via ambulance for treatment or was taken care of by medical officials on the scene. The firefighter had reportedly burned his ears, which was only a minor injury.

The responding fire departments were from St. Michaels, Tilghman, Easton, Oxford, Talbot EMS, and the Maryland National Guard. Fire Marshals estimated the damage to the house was around $20,000 to the structure and then an additional $25,000 of damaged done to resident’s belongings. The fire continues to be under investigation. Officials from the American Red Cross were on the scene to assist the displaced family.