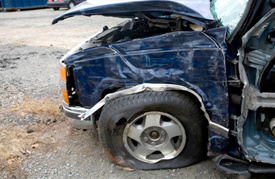 Columbia, CT (NewYorkInjuryNews.com) – Connecticut police investigate the crash between a sport utility vehicle and a tractor-trailer on Route 6 that occurred Thursday, February 5, 2010, according to the Hartford Courant.

Officials reported to the scene where the SUV had jumped lanes into the path of the tractor-trailer in the westbound lanes of Route 6. The semi truck then jackknifed and came to a halt on the shoulder of the road leaning against the guardrail. Police authorities reported that the driver of the 2003 GMC Envoy sustained serious injuries in the motor vehicle accident.

The injured driver was identified as a 62-year-old Gary Mish, resident of Willimantic. Emergency medical services (EMS) arrived at the scene to transport the injured man to a Life Star helicopter where he was flown for treatment to Hartford Hospital. Doctors and nurses treated him for leg and ankle injuries.

Police reported that the operator of the tractor-trailer remained unharmed in the crash. He was not identified in the wreck. Police investigators continue to probe the scene of the crash to determine how the motor vehicle accident occurred.