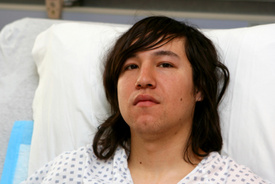 Legal news for Massachusetts personal injury attorneys –A teenage boy is at Massachusetts General Hospital in the intensive care unit after being struck by a cement truck.

Danvers, MA (NewYorkInjuryNews.com) – A teenage boy who was hit by a truck transporting cement while he was walking to his bus stop on Thursday, February 4, 2010, is now reported to be doing well, according to Danvers Herald.

The teenager, identified as 17-year-old Mike Philbrook, a junior at North Shore Vocational School, was reportedly attempting to walk across Maple Street near Burley Avenue, when the cement truck struck and seriously injured him. Mike is still under the care and supervision of doctors and nurses at Massachusetts General Hospital in the intensive care unit. He is mainly being treated for a broken pelvis. He also suffered from a contusion on his head and was scheduled to go in for surgery for his pelvic injuries.

Police reported that Philbrook had ended up under the belly of the cement truck after it struck him. Danvers police had received a call at 7:20 a.m. about the incident. Philbrook was found to be conscious at the scene. He was quickly taken to the hospital and the school was alerted of the accident. Crisis counselors were called to the teenager’s school and were present for students by the time the first bell rang.

The boy’s identity was released to affirm other parents that it was not their child involved in the incident. Two other teens had witnessed the accident at the scene. The driver of the truck was taken back to headquarters in Wilmington where his cargo was inspected. The investigation continues.