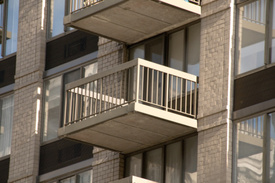 New York, NY (NewYorkInjuryNews.com) — Careless construction work performed at a plush apartment in Midtown resulted in a film of highly toxic dust left in the building, reported February 1, 2010, according to The New York Post.

Reports showed that the apartments were found to contain crystalline silica, which is a toxic substance found in mortar and at Ground Zero. It reportedly permeated many of the tenant’s apartments located at L’Ecole, at 212 E. 47th Street. The dust came from the facade work done, claimed an attorney representing one of the tenants who is currently suing the building.

An environmental testing-company, Microecologies Inc., reportedly found the high levels of the carcinogenic dust in tenant 53-year-old Steven Rosenhaus’ apartment on the 20th-floor in May 2009. Rosenhaus had reportedly come home one day, 7-months earlier to find his apartment with a blanket of the toxic dust from the construction work. He reportedly suffered from difficulty breathing and an eye infection.

The buildings managing office and the developer supervising the construction were called but could not be reached for a comment. In court documents, the buildings management claimed that they had done nothing wrong.