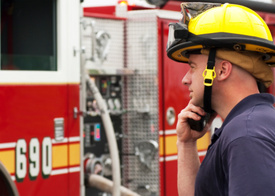 Cambridge, MA (NewYorkInjuryNews.com) – A fire truck speeding past an elderly pedestrian, with its lights flashing and sirens blaring suddenly injured the woman when the fire hose hanging off the truck struck and killed her, Tuesday, January 26, 2010, according to CNN.

Cambridge police and emergency medical services rushed to the scene where the woman lay there after being struck by the massive fire hose. Witnesses reported seeing almost 50 feet yards of fire hose that was unraveling unbeknownst to the driver. The Cambridge fire department fire truck looked as if it were responding to a call and the hose was not secured correctly in the compartment.

The Cambridge police department reported that hose swung around as the engine turned the street corner and struck the woman. Police identified the victim as 82-year-old Gertrude King, who was transported to Massachusetts General Hospital. Gertrude underwent surgery, but her injuries proved fatal two days after the accident.

It was reported that another fire engine following the first truck saw the accident had notified the fist crew of what had occurred. Gertrude was standing on the median island waiting for the fire engine to pass by when the hose struck her. Cambridge police continue to investigate why the hose came unraveled.