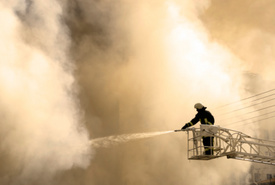 Sayreville, NJ (NewYorkInjuryNews.com) – Part of a New Jersey chemical plant turned into a fiery inferno injuring one firefighter Sunday night, January 24, 2010, according to the Star-Ledger.

The Middlesex County Office of Emergency Management reported that the fire had been called in that evening. Firefighters rushed to the scene of the blaze that was quickly consuming the abandoned plant off of South Minnisik Avenue. As firefighters combated the growing flames at the Hercules facility in the industrial area in the town of Sayreville, 40 pieces of equipment were put to use in a desperate attempt to contain the flames.

Water tankers from surrounding counties were used to extinguish the blaze. As firefighters dumped hundreds of gallons of water on the flames on the roof, the second floor collapsed as the building began to give way under the extreme heat and water. One of the firefighters combating the flames sustained injuries on the scene. It was not reported if he was taken for treatment at an area hospital or was treated on the scene.

The unidentified firefighters injuries were not specified. The fire was contained and the cause of the blaze is still under investigation. It was reported that there were no chemicals inside the abandoned building. The investigation continues.