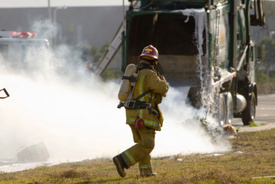 Montpelier, VT (NewYorkInjuryNews.com) – A three-vehicle collision involving two tanker trucks turned into a fiery and fatal scene on the Vermont Interstate Monday morning, January 25, 2010, according to the Berkshire Eagle.

Police reported to the scene at the fiery pre-dawn accident where two-tanker trucks transporting milk collided and then one caught fire on Interstate 89 in the southbound lanes. The McDermott Inc tanker jackknifed and came to a halt across the highway. Then a car, attempting to pass the one swerving truck was hit and rammed into the second vehicle. Both of the cargo parts of the trucks broke out into flames.

One of the truck drivers, identified as 43-year-old Christopher Trivento, did not survive the crash. One of the passengers in the car, identified as 62-year-old Linda Hall, was also killed in the fiery wreck, while her husband, 66-year-old John Hall survived and was treated and released from an area hospital.

Police identified the driver of the McDermott tanker as 59-year-old David Dike. He survived the collision and was treated at the hospital. Vermont State police reported that both lanes of the interstate were shut down between Middlesex and Berlin for hours. The northbound lanes reopened at 630 p.m. while the southbound lanes remained closed for investigation and cleanup until 5:30 p.m. The milk that the trucks were carrying was taken via another tanker.

Police reported that the roads had patches of ice, which was deemed a contributing factor in the fatal collision. There have been no charges filed in correlation to the fatal three-vehicle crash.