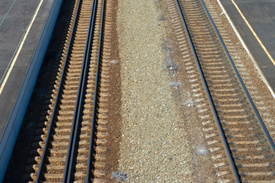 Rockville, MD (NewYorkInjuryNews.com) – The National Transportation Safety Board (NTSB) www.ntsb.gov investigates two Metro track employees were working on a section on the Red Line when they were hit and killed by a prime mover Tuesday morning, January, 26, 2010, according to WBALTV.

The fatal accident occurred at 1:45 a.m. when the two men were struck by the diesel-powered vehicle, which was used to move heavy equipment. They were working on the Red Line heading toward Shady Grove when the tragedy happened. Police and emergency medical services (EMS) arrived at the scene to assist in the early morning accident. One of the workers injuries proved fatal at the scene and he was declared dead by responding officials. The other worker survived the blow from the machinery and was rushed for treatment at Suburban Hospital in Bethesda. Doctors and nurses attempted to resuscitate him, but, sadly, he passed away soon after arrival.

The identities of both the victims have not been announced due to pending notification of the two men’s family’s. Due to the accident, transportation on the Red Line was affected and Metro offered free shuttle bus rides between Rockville, Twinbrook and Shady Grove stations. The investigation continues in order to determine what took place and caused this fatal accident.