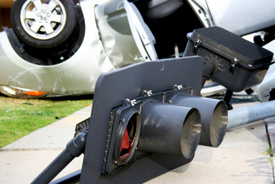 Hartford police officials reported to the scene of the accident at the intersection of Chandler and Coolidge streets. Police reported that both vehicles had rolled over. One of the vehicles crashed through a nearby utility pole and sent live electrical wires cascading to the ground.

Emergency medical services (EMS) and local fire officials rushed to the scene to assist with the crash. One of the passengers in one of the badly damaged vehicles needed to be rescued from within car. The severely injured 14-year-old boy was extricated and pulled to safety. Paramedics loaded him into an ambulance where he was rushed to Hartford Hospitals, where doctors and nurses did all they could to save him until his injuries proved fatal. Medical officials pronounced Alex Cruz to be dead.

Police reported that there were seven more victims who sustained injuries and were taken to area hospitals for treatment. They were all expected to survive. Police continue to investigate the crash to determine the cause.