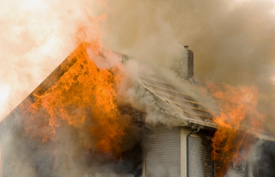 Amherst, NH (NewYorkInjuryNews.com) – An early morning blaze injured one firefighter and left one family homeless Tuesday morning, January 19, 2010, according to The Nashua Telegraph.

Firefighters rushed to the scene of a chimney fire that quickly spread up through the attic of a duplex located at 5 Cub Circle. Firefighters arrived at the scene and were joined by emergency medical services (EMS) shortly after. The Tuesday morning blaze began at 12:30 a.m. when the family’s smoke detectors blared and the residents called 911. The family escaped from their burning home unscathed due to a quick response to the smoke detectors, which potentially saved their lives.

Luckily, there was nobody that sustained serious injuries in the one-alarm blaze. While firefighters battled the roaring flames side by side with local company firefighters, one was injured. He was treated at the scene for minor burns and was expected to recover. The blaze was finally bought under control at 1:23 a.m. after a tireless battle with the flames. Firefighters from Merrimack, Milford, and Hollis assisted at the scene.

Fire officials reported that flames first began in the chimney then quickly spread to the rest of the structure. Half of the duplex was too damaged to for the family to live in, while the other side remained untouched by the blaze. The homeless residents stayed with their neighbors for the rest of the night. The homeless family, identified as Douglas Boisvert and Kaitlin Sloper, with three children and a friend declined immediate aid from the Red Cross. Firefighters left the scene at 3:14 a.m.