Truck crashes through guardrail where teen was killed 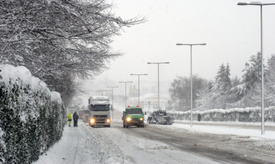 Legal news for Connecticut truck accident attorneys – A truck crashed in the same place a school bus crashed that killed 1.

Hartford, Ct (NewYorkInjuryNews.com) – A delivery truck crashed into a guardrail and swerved off the highway and slid into a deep embankment, Thursday morning, January 21, 2010, according to NBCConnecticut.

Connecticut State police investigate the scene of the crash and believe that the poor road conditions may have been a factor. Two weeks ago, a teenager was injured in a school bus crash January 9th when the bus crashed in the same area. Tragically, the 16-year-old teenager died from his injuries while in the hospital. The boy, Vikas Parikh, resident of Rocky Hill was traveling with other students to a school competition when the crash occurred.

The delivery truck crashed at 7 a.m. according to police reports. It had been traveling in the westbound lanes on Interstate-84 when it went through the guardrail and landed below in the embankment.

Police identified the driver of the truck as a 37-year-old man. He had reportedly lost control of the vehicle due to, what police suspect, was fatigue or another factor. The investigation continues. He survived with non-life threatening injuries. It was not reported if he was treated by medical professionals. The investigation continues as police try to determine what caused the crash and if the road conditions played a part.