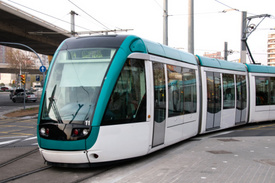 Lutherville, MD (NewYorkInjuryNews.com) – The Maryland families of the two 17-year-old boys who were tragically killed by a light rail train last summer were approved for $1.5 million settlement, Wednesday, January, 20, 2010, announced the Baltimore Sun.

Jarrett Connor Peterson and Kyle Patrick Wankmiller suffered fatal injuries while they were walking along the tracks when the light rail struck and killed them July 5, 2009. The tracks the boys were walking along were usually used for southbound trains, but due to some earlier acts of vandalism, the Maryland Transit Authority had switched the lanes when the northbound train struck them.

The families’ lawyer went to file a suit against Maryland Transit Authority claiming that the train operator took his eyes off the road moments before striking the boys. Moreover, the families lawyer were ready to show the courts that the MTA operators did not report seeing the two teenagers on the tracks; that the agency did not have a set process for letting operators know to be more careful and aware when the trains switch tracks. It was reported that the bodies of the two dead boys were found by another inspector from a third train that day.

Baltimore County police took over the investigation from the Maryland Transit Authority, due to the families request. MTA fired the two train operators and punished six other employees who were working at the time of the tragic accident.The state Board of Public Works approved the families settlement before a lawsuit was filed. Soon after, MTA adopted new policies in regards to people on the tracks. The families of the victims were satisfied with the outcome of the settlement and with MTA’s changes to prevent tragic accidents such as this one.