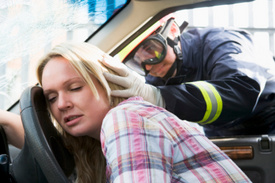 Wilmington, Delaware (NewYorkInjuryNews.com) – A car was t-boned by a tractor-trailer and seriously injured one woman on Newport Gap Pike, Saturday morning, January 15, 2010, according to the Newark Post.

Police officials reported to the scene where a Volkswagon Beetle was traveling down E/B Faulkland Road when the car went through the intersection at Newport Gap Pike and a semi truck crashed into it. Police believed that the driver of the 2007 Volkswagon Beetle, identified as Mary Decostanza, failed to stop at a red light and the tractor-trailer went through the vehicle in the intersection. Decostanza was in serious condition from the impact of the wreck. The driver of the 2006 Western Star- tanker truck, identified as Matthew Dinnunzio, also sustained minor injuries in the wreck.

Emergency medical services (EMS) quickly arrived at the scene to transport the severely injured woman and the injured man to Christiana Hospital. Decostana was treated for a potential traumatic brain injury (TBI) while Dinnunzio was treated for a hand injury and other minor lacerations. He was treated by doctors and nurses and was released soon after. Investigating police officials believe that the Beetle was struck on the driver’s side. An Accident Reconstruction Team was on the scene for four hours to determine how the crash occurred.