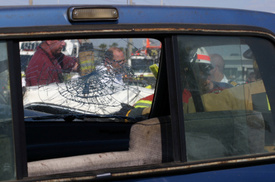 Legal news for Connecticut truck accident attorneys – A Truck crashed into a sport utility vehicle and fatally injured one in Enfield, CT.

Enfield, CT (NewYorkInjuryNews.com) – A truck crashed and rolled over injured after striking a sport utility vehicle (SUV) on Interstate 91 on Saturday, January 16, 2010, according to the Hartford Courant.

Police and medical professionals rushed to the scene of the crash in Enfield to find that the early morning collision claimed the life of one man. Responding police reported that the truck struck the SUV around 5:20 a.m., which then jackknifed, rolled over, and crashed into a Jersey sound barrier. Officials identified the fatally injured driver of the SUV as 64-year-old Anthony Liquore, resident of Enfield. An ambulance transported the severely injured driver to Baystate Medical Center in Springfield, Massachusetts.

Liquore past away under the care of doctors and nurses at the hospital. The truck driver, identified as Timothy Zabek, was also taken to Baystate where he was treated for a potential traumatic brain injury (TBI). The truck spilled garbage all over the roadway when it flipped over. The truck accident closed down the highway for seven hours so that police could investigate the scene and Hazmat crews could cleanup the garbage. The investigation continues.