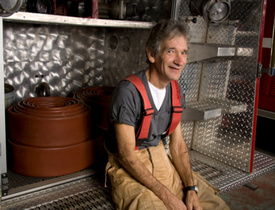 Tioga, NY (NewYorkInjuryNews.com) – A Tioga firefighter was responding to a call when he struck a recycling truck, which claimed his life, around 6 a.m. Wednesday, January 13, 2010, according to WBNG.com.

Police and emergency medical services (EMS) rushed to the scene of the motor vehicle accident in Tioga County. Officials arrived at the scene on State Route 17-C at the intersection of Schoonover Road. The two-vehicle crash delayed traffic for hours while police investigated and the crash scene was cleaned up.

The volunteer firefighter was identified as 81-year-old Leroy Kemp. He volunteered at Tioga Center Fire Department. Tragically, Kemp’s injuries proved fatal and he was declared dead at the scene of the accident. Kemp, a former chief, was to be remembered as a “nice and energetic man,” stated officials.