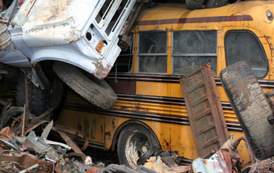 Hartford, CT (NewYorkInjuryNews.com) — A school bus traveling with 16 high school students collided with a car on I-84 in Hartford and killed one student at 8 a.m. Saturday, January 9, 2010, according to Hartford Courant. The school bus then crashed through the guardrail and went off the highway 20 feet into the embankment.

The crash occurred in the westbound lanes between exits 45 and 46. Police and paramedics rushed to the scene of a tragic crash, which took the life of one student on board the bus. The students were from the Greater Hartford Academy of Mathematics and Science, a magnet school in Hartford. Sources stated they were on the way to a robotics competition at Farmington High School when the fatal accident occurred. There were 15 students who were injured, some critically, who were taken to area hospitals to be cared for by doctors and nurses.

The bus driver also sustained injuries in the crash. None of the injuries were considered life threatening. A funeral was held Tuesday January 12, 2010 for the beloved student, Vikas Parikh, who was killed in the tragic wreck, where 1000 people mourned the death of the smart, young man.

The executive director of the Capitol Region Education Council stated, “Our hearts, and the hearts of every educator and parent goes out to his parents, his family, his community in Rocky Hill, students and faculty of the Greater Hartford Academy of Math and Science, and the entire community.”

The cause of the fatal motor vehicle accident continues to be under investigation.