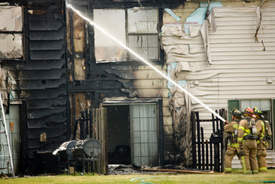 Boonton Township, NJ (NewYorkInjuryNews.com) – A two-story Bradford Terrace condo blaze was reported by a neighbor who heard the smoke alarm and alerted Boonton firefighters to rush to the scene at 7:44 p.m., Sunday evening, January 10, 2010, according to the Record Journal.

Boonton Township firefighters arrived at the scene of the condo fire, which had been under construction while the family was traveling. Firefighters worked to bring the flames under control while others went into the blaze to make sure that there were no people inside the burning building. Firefighters saved one of the family cats, while another cat was lost in the fire. The surviving cat was given to animal care and control.

One Boonton firefighter happen to slip and fall on a patch of ice and fractured his wrist at the scene. He was taken to be cared for at St. Clare’s Hospital for his injuries. Police did not identify the injured firefighter. Police did not report any other injuries due to the blaze. They did discover that the family who lived there was traveling out of the country at the time of the blaze.

Firefighters determined that the flames began in the living room on the second floor. The flames were extinguished within 10 to 15 minutes. Police and fire officials said that the fire did not appear to be set purposefully. Officials notified the family of the blaze Monday morning.