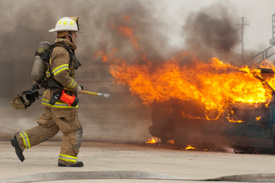 Staten Island, NY (NewYorkInjuryNews.com) – Local New York residents snapped pictures of a semi truck that had reportedly ignited in flames injuring the driver and one firefighter, at 8:15 a.m. Monday January 11, 2010, according to Staten Island Advance.

Officials reported that the truck was parked closed to a Mobile gas station located on Richmond Avenue near the intersection of Victory Boulevard. The truck had burst into flames spilling some of its contents of motor oil, anti-freeze and windshield wiper fluid, which then also caught fire. The contents also seeped into nearby sewers.

FDNY hazardous materials unit was sent out when responding officials reported the type of spilled chemicals from half the truck’s cargo. New York City Fire Department (FDNY) spokesperson stated that one firefighter sustained injuries while combating the raging flames that were quickly consuming the truck in Bulls Head neighborhood. It took responding units 48 minutes to bring the violent flames under control.

Emergency medical service (EMS) rushed to the scene to assist FDNY. An ambulance transported the injured truck driver to a local hospital to be cared for by doctors and nurses. His identity remained undisclosed. The wounded firefighter was taken for treatment at Staten Island University Hospital. The firefighters injuries were not specified. His condition was not known.

Authorities rerouted drivers around the truck wreck since Richmond Avenue was closed in both directions. The flames did not cause damages to the gas station or any other vehicles.