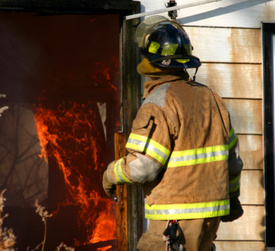 Legal news for Connecticut work-related firefighter death attorneys–A firefighter was electrocuted by an electrical wire while battling a blaze in Branford, Connecticut.

A witness who saw the climbing flames from the town dock located at Branford Point reported it at 2:58 a.m. Responding firefighters arrived at the scene where one of the summer homes siding and exterior wall was already visibly damaged. One firefighter was crawling through water underneath the cottage when a live electrical wire struck the water and electrocuted him.

The firefighter, identified as John Massey Jr. was transported via ambulance to be treated by doctors and nurses at Yale-New Haven Hospital. Medical officials reported that Massey’s injuries were minor. The two cottages were unoccupied at the time of the blaze since both residencies were summerhouses.

The addresses of the properties damaged by the flames, water, and smoke were 23 and 24 Lanphiers Cove. Firefighters continue to look into what caused the fire. The United States Fire Administration (USFA) www.usfa.gov reported that there were 13.2 deaths per million people in the nation in 2006. In Connecticut, there was a reported 6.6, which is one of the lower death rates compared to the rest of the county.