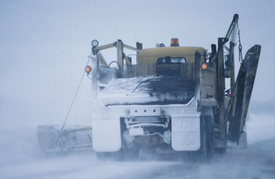 Mount Pleasant, PA (NewYorkInjuryNews.com) – A truck operator was fatally injured when he lost control of his semi truck on the Pennsylvania Turnpike Monday, January 4, 2010, according to Pittsburgh Post-Gazette.

Police officials and local paramedics arrived at the scene where the semi truck had crashed at 8:30 a.m. Police reported that the tractor-trailer was traveling in the westbound lanes when the driver lost control and smashed into a guardrail near the New Stanton interchange. The truck continued to swerve onto the berm and then landed in the wooded area off the side of the road.

The truck driver was identified as 59-year-old Alexander Gutmans, who worked for Transport America. He was wearing a seat belt and the force of the crash caused a potential traumatic brain injury (TBI). He was taken to Excela Frick Hospital where he was pronounced dead. Authorities are investigating the crash to determine if he suffered from a medical disorder in the incident. The National Highway Traffic Safety Administration (NHTSA) www.nhsta.gov provides statistics and safety issues to be aware of as a truck driver.

Truck drivers should always wear their safety belt. Nearly 66 percent of truck crashes occurred in rural areas during the daytime or on the weekends. About 27 percent of large fatal truck accidents had one speeding conviction. Drivers should avoid any unnecessary distraction to maintain safety on the roads.