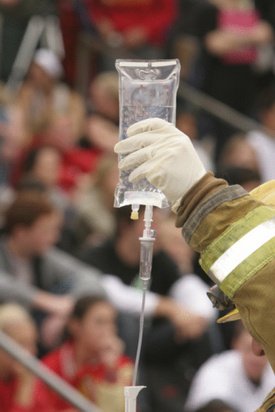 Legal news for Massachusetts work-related firefighter death attorneys—An injured firefighter was treated by doctors and nurses after collapsing at a house blaze.

Lynn, MA (NewYorkInjuryNews.com) – A 2-alarm house fire, just down the street from Hood Elementary School, caused one firefighter battling the flames to collapse, Tuesday January 5, 2010, according to WHDH-TV.

As soon as medical officials arrived, they gave the firefighter CPR and used a defibrillator. The firefighter was treated at the scene for 15 minutes and was put in the bed of an ambulance, which took him to a local hospital to be treated by doctors and nurses. His condition had not been released as of yet.

The firefighters identity was not disclosed. Firefighters rescued a dog from the house. The two men who had purchased the home were not there at the time of the blaze. The 2-alarm fire completely obliterated the property.