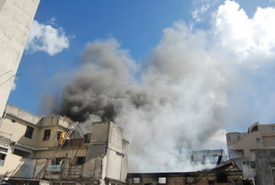 New London, CT (NewYorkInjuryNews.com) – One firefighter was injured while battling a house fire at 879 Bank Street, which displaced a family on Friday, January 1, 2010, according to the Day.

Responding firefighters arrived at the scene of the blaze after receiving the call about the apartment fire at 12:28 p.m., according to Battalion Chief Keith Nicholas. Firefighters began combating the blaze while flames were climbing out from two-second story windows, where one female resident lived. The woman’s son and teenage grandson lived in the downstairs apartment.

The blaze became a two-alarm fire, and the sub base FAST team firefighters arrived to aid the already working firefighters. One of the firefighters was injured, and was transported via Waterford ambulance to be treated for a leg injury at Lawrence & Memorial Hospital. Officials reported that all the residents escaped the apartment blaze unharmed.

Fire Marshalls believed that the flames began on the second floor of the apartment. The cause has remained under investigation. The fire, smoke, and water greatly damaged the structure. Firefighters brought the flames under control at 1:14 p.m. The American Red Cross arrived at the scene to assist the displaced family around 1:30 p.m.