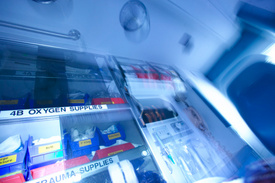 Legal news for New York Motor Vehicle Accident lawyers— A collision claimed the life of one man in Greenwich.

Greenwich, NY (NewYorkInjuryNews.com) – New York State police reported to the scene of an accident where a collision fatally injured one man, Monday, December 21, 2009, according to Albany Times Union.

Emergency medical services (EMS) arrived at the scene to assist at the evening crash. Police officials reported that an Oldsmobile traveling southbound on Route 113 had crashed into a Ford Explorer when he failed to yield the right of way as he turned at the intersection of Route 29. The crash took place at 10:53 p.m. in Easton, according to police reports.

EMS transported Lang via ambulance to Saratoga Hospital to be treated by doctors and nurses. Lang sustained chest wounds and a leg injury from the collision. He was later released after treatment. State police in Greenwich continue to investigate the fatal crash to determine the factors involved. Police did not report that alcohol was a factor. The investigation continues.