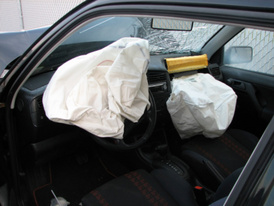 Guilford, CT (NewYorkInjuryNews.com) – A tragic crash claimed the life of a man from Old Lyme when his vehicle collided with a tractor-trailer on Interstate 95 Friday afternoon, December 18, 2009, according to The Hartford Courant. Connecticut State police and emergency medical services (EMS) arrived at the scene of the fatal wreck near exit 59.

Police authorities reported that the collision occurred when the tractor-trailer had begun to merge right in the southbound lanes of the Interstate highway 95 around 1p.m. in the afternoon. The car came form behind the truck and apparently struck the tail-end of the semi- truck causing the car’s airbag to deploy.

The man traveling in his Ford Escort at the time of the wreck was identified by police as 57-year-old Santo Biondo. He was rushed to Yale-New Haven Hospital where he was treated by doctors and nurses for his critical injuries. His injuries proved fatal while in the care of medical professionals.

The operator of the tractor-trailer was identified as 58-year-old Oliver Labadie, resident of Hyde Park, Massachusetts. Police reported that he appeared uninjured in the fatal collision. If anyone has information regarding this accident, contact barracks at (860) 399-2100.