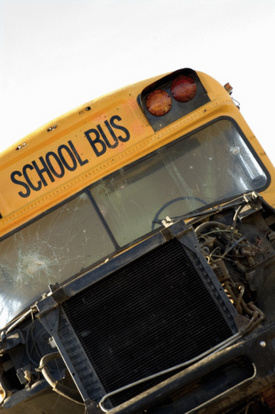 Red Lion, DE (NewYorkInjuryNews.com) –- A school bus crashed into another vehicle which injured two students on board Wednesday, December 16, 2009, according to the News Journal.

Police and emergency medical services (EMS) arrived at the scene of the motor vehicle accident that occurred at 3:30 p.m. Delaware State police had reported that the school bus, transporting 29 students, had stopped on Del 1 southbound, yielding to a 2006 Nissan Altima in front of it, then suddenly accelerated slamming into the Altima.

There were 29 students from Delaware Military Academy on board the bus at the time of the crash. Two of the students – a 14-year-old and a 15-year-old girl– were injured on the bus. There identities were not released.

Police identified the school bus driver as 57-year-old Charlene Reed, who was cited for the crash. Emergency medical services (EMS) arrived to the scene and treated the injured, which included examining the passengers of the Altima, a 39-year-old mother and her 4-year-old son. Luis Vazquez, 43, who was driving the car, remained unharmed.

Officials reported that a tow truck had to take the damaged school bus from the scene. Another bus was sent to continue the route to take the students home.